After a long journey, my PhD dissertation is finally finished, approved, and printed, albeit only in a very small, privately published run. The only thing that now stands between me and my doctorate is the public defence on Tuesday, 20 June 2017, 2 pm sharp, at the Agnietenkapel in the heart of Amsterdam. And just to make that very clear: ‘public’ means that everybody is welcome to attend. If you’re still hesitating, you might want to read on to get a better idea of what my book is all about.

END_OF_DOCUMENT_TOKEN_TO_BE_REPLACED

In a sure sign that my time as a PhD candidate in Amsterdam is running out, a job ad looking for my successor are now out and about.You can still apply for another month, until the closing date (15 July).

Giving birth to a brainchild on the scale of a PhD thesis is never easy, but I can assure you that circumstances here are better than in many other settings I could think of. To a significant extent, this is due to the fact that PhD candidates in the Netherlands have traditionally been viewed as junior academics with salaries, rather than mere students. (The only downside is that you won’t be eligible for student discounts.)

If you’d like to know more about what it’s like to do a PhD in this setting, drop me a line or two with your main questions.

It’s been eerily quiet around here for too long! Many things have happened since I ceased posting more regularly, and perhaps I’ll find time to dwell on some of them in the future. Among other things, I have devoted much of my time to intensive manuscript research, which has come to be defining for my PhD thesis. But for now, I would like to advertise the all-new call for papers for this year’s postgraduate workshop of the Society for the History of Alchemy and Chemistry (SHAC). I’m particularly thrilled about the keynote lecturers and the collaboration with ARTECHNE at Utrecht University…

END_OF_DOCUMENT_TOKEN_TO_BE_REPLACED

This year’s conference season was brief but intense for me, with conferences back to back in London and Görlitz. Instead of writing about my own talks, I’ve decided to highlight a few papers by other scholars that I particularly enjoyed. This post will give you a glimpse of some of the debates on prophecy and astrology and, particularly, more or less sane prophets I learnt about while participating in the ‘Revisiting Early Modern Prophecies’ conference at Goldsmiths, University of London, convened by Ariel Hessayon and Lionel Laborie. My selection is, of course, highly subjective, and my hazy memory and notes might sometimes blur the line between the actual talks and the thought processes they sparked off. But that should rather be seen as a compliment to the speaker, shouldn’t it?

END_OF_DOCUMENT_TOKEN_TO_BE_REPLACED

And now for something completely different: football. Admittedly, I have but the most tenuous of excuses for this excursion, provided in a roundabout manner by the ‘Revisiting Early Modern Prophecies’ conference (26-28 June). It also feel like something of a coming-out, to be honest: until two years ago, I did not give an elitist fiddler’s fart about football.

END_OF_DOCUMENT_TOKEN_TO_BE_REPLACED

Marieke Hendriksen (University of Groningen), my blogging colleague from The Medicine Chest, also stopped by at the alchemy exhibition in Düsseldorf, filling you in on the modern section of the exhibition I had missed…

May and June have a lot of bank holidays in the Netherlands, and this year we decided to use one of the bank holiday weekends for a short road trip to Germany. It gave me to opportunity to visit the exhibition Art and Alchemy at the Düsseldorf Museum Kunstpalast, which alone was worth the trip. This extremely well-researched exhibition brings together unique documents and objects, like the Ripley Scrolls, the Leiden Papyri, porcelain, glass, distillation apparatus and historical and contemporary art works.

As I have discussed before on this blog, alchemy was strongly connected to medicine in the early modern era, so this was an exhibition I definitely wanted to see. The curators have done a great job, visualizing the connections between early modern art, alchemy and medicine through intelligent matching of objects, images and texts.

The exhibition is divided over two spaces: one focuses… 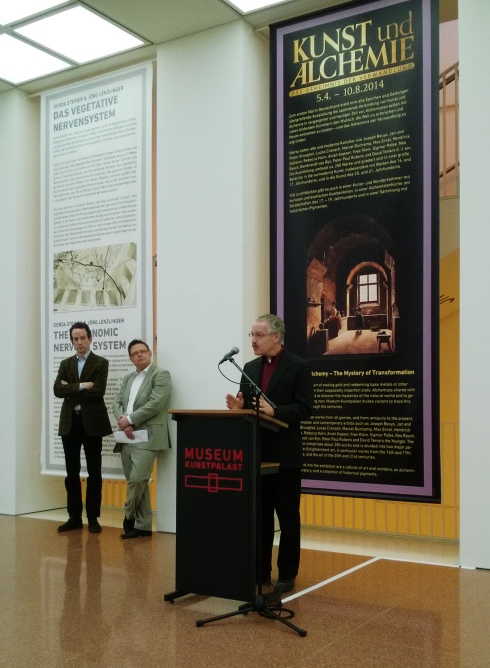 Before entering the exhibition, Lawrence M. Principe gave a very brief introduction on alchemy, while art historian Sven Dupré and curator Dedo von Kerssenbrock-Krosigk (right to left) expected their turns in the background.

Yesterday I went on a pilgrimage to Düsseldorf to see the alchemy exhibition currently running at the Museum Kunstpalast. I chose this particular date because of an event announced as a book launch that actually turned out to be a guided tour through the exhibition. A handful of attendees had the privilege of being guided through the marvels of pre-modern alchemy by Sven Dupré and Lawrence M. Principe, who had himself contributed some exhibition pieces.

END_OF_DOCUMENT_TOKEN_TO_BE_REPLACED

Martin Mulsow and Joachim Telle (right) convened the research workshop on alchemy at the Forschungsbibliothek Gotha. Barely visible on the far left, there is a laptop screen behind which I was furiously typing away to transcribe relevant passages out of Kriegsmann’s works. (© Thüringischer Landesanzeiger, 14 September 2012.)

On 12 December 2013, the world lost the scholar most knowledgeable about all things pertaining to German alchemy from the late middle ages to the twentieth century: Joachim Telle. While this sad event already took place half a year ago, I learnt about it at a staff meeting a few months ago and have only now been able to read a complete eulogy in the new issue of Ambix, released online this morning. I had the pleasure of meeting Telle in September 2012, at a research workshop on alchemy at the Forschungsbibliothek Gotha, and remember him as a passionate teacher and true character with rough edges, as very helpful, sociable and lively. As Telle exclusively wrote in German and blazed many trails for my own research, I’d like to introduce my readers to some of his pioneering work and dedicate this post to his memory.

END_OF_DOCUMENT_TOKEN_TO_BE_REPLACED

Wilhelm Christoph Kriegsmann and the Secrets of Alchemical Symbolism

The eagerly expected second issue of the young, open-access journal Correspondences was released this past Saturday. Yours truly also contributed a substantial article on Wilhelm Christoph Kriegsmann (1635–79). Even so, there are several things that had to be cut out. For instance, while I devote a fair amount of attention to his philological reconstruction of the Tabula Smaragdina (1657) and his Epistola (1669) arguing that Plato was a noteworthy chymist and, moreover, taught much that agrees with the Gospel of John, Taaut (1665) received short shrift. As this work on ‘the interpretation of the chymical signs’ (Fig. 1) was actually the one due to which I first became interested in Kriegsmann, I thought I’d share some outtakes, as it were, with my readers.

END_OF_DOCUMENT_TOKEN_TO_BE_REPLACED

As the international student representative of the Society for the History of Alchemy and Chemistry and lead organizer of this year’s postgraduate workshop, I would like to draw my readers’ attention to the following call for papers. It would have been a great opportunity for the reblog feature but, alas, it doesn’t work for ambix.org where I’ve also posted a few minutes ago. Anyway, as Judith Mawer (University of Exeter) and myself penned it, with a lot of insightful and patient advice from our predecessor Jo Hedesan (Oxford University), I feel few qualms about also posting it on my personal blog. Without further ado:  END_OF_DOCUMENT_TOKEN_TO_BE_REPLACED

PRAELUDIA MICROCOSMICA
Create a free website or blog at WordPress.com.